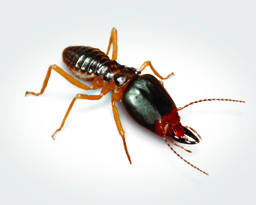 Where Do Formosan Termites Live?

Formosan termites are an invasive species that originated in East Asia. In the U.S., Formosan termites prefer the warm southern climates of states like Florida, Georgia, Tennessee, and Texas, where they organize into huge subterranean colonies and build intricate mud-tube nests inside the walls of structures.

When Do Formosan Termites Swarm?

New Formosan termite colonies are created when winged termites, also known as swarmers, are released from the colony and swarm. A single colony of Formosan termites can release over 70,000 swarmers. Swarming usually occurs in the evening following a warm, rainy day in late spring or early summer.

Formosan termites are widely known for their impressive colony size and their ability to consume wood at a rapid rate, which makes them a nightmare for homeowners. The most aggressive subterranean termite species, they are known for aggressively defending their nests by releasing a white liquid meant to trap their enemies.

With colonies capable of producing more than 1,000 eggs per day, colonies expand quickly and the rate of damage grows exponentially. And, because they are often hidden from sight, these voracious termites often go undetected until a major renovation or inspection occurs.

How to Prevent a Formosan Termite Infestation

Since these aggressive termites are difficult to control once they infest a structure, prevention is key. Avoid water accumulation near your home's foundation. Divert water away with properly functioning downspouts, gutters, and splash blocks. Reduce humidity in crawl spaces with proper ventilation. Never bury wood scraps or waste lumber in the yard. Most importantly, eliminate wood contact with the soil. Maintain a one-inch gap between the soil and wood portions of the building.

If you live in an area that is especially susceptible to termite infestation, like the Southeastern United States, a termite baiting system is recommended for effective prevention. Arrow Exterminators is the No. 1 installer of Sentricon, the most advanced termite baiting and treatment system in the world. Learn more about Sentricon.

Signs of a Formosan Termite Infestation

As these insects eat their way through a structure, they leave behind smooth-sided galleries. Other signs of an infestation include sagging walls and floors and winged swarmers with straight antennae that arrive in late spring or early summer. If you suspect you have an infestation, consult a professional termite control specialist. Our team offers comprehensive termite inspections and can work with you to develop a complete termite control plan. Fill out the form below to request an inspection today!