Known for their bright black and yellow stripes, yellow jackets love to terrorize backyards and summer picnics. With a yellow and black head and a striped abdomen, yellow jackets resemble bees in color, size, and sting, but these buggers are more vibrant in color, with thinner, more defined waists and hairless hind legs.

Signature to their species, their abdominal pattern can help entomologists and pest professionals identify a specific type of yellow jacket. Besides their distinctive markings, this predatory social species can be identified by their large colonies and their rapid, side-to-side flight patterns prior to landing. 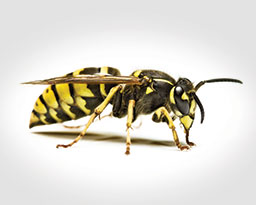 Are Yellow Jackets Bees or Wasps?

Yellow jackets are a social wasp species. They nest in the ground or in cavernous areas like eaves and attics. They feed on sweets and proteins and are known to invade outdoor human activities.

Where Do Yellow Jackets Live?

Yellow jackets can be found any place where humans live. They often build their nests underground or in hollow logs, tree stumps, attics, between walls, under eaves, and inside recycling bins where sugars are common.

Constructing their nests from wood fiber chewed into a fine, paper-like pulp, yellow jacket nests can be hard to spot, but their entrances are typically the size of a nickel. More common in hot and arid climates, yellow jackets tend to forage for food no more than 1,000 feet from their nests — the size of three football fields.

Yellow jacket nests flourish in the spring and summer before dying off in the winter. Started by a single queen, new nests can reach the size of a basketball by summer’s end — with over 1,000 to 3,000 workers. In some parts of the coastal United States, winters are mild enough for nests to last multiple seasons, often with several egg-laying queens. These nests can reach an excess of 100,000 adult wasps.

After hiding out during the winter in hollow logs, stumps, or tree bark, fertilized queens emerge in spring to select a nesting site and build a paper-like nest to lay her eggs. Once some workers are born, they begin caring for other larvae by feeding them chewed meat or fruit, expanding the nest, foraging for food, caring for the queen, and providing colony defense.

Until her death in the fall, the founding queen remains inside the nest, laying eggs and expanding her brood of up to 10,000 workers and 15,000 nesting cells.

Adult yellow jackets feed off of carbs and sugars like fruits, flower nectar, and tree sap. Larvae benefit from proteins like insects, meats, and fish. Since many of the meat sources yellow jackets feed on are pest species, yellow jackets are considered beneficial to agriculture. Though in late summer, foraging workers pursue meats, ripe fruits, human garbage, sodas, and picnics to foster a new generation of queens.

Do Yellow Jackets Build Nests in the Ground?

Many species of yellow jackets construct nests both above and below ground. Sometimes they will even use abandoned rodent burrows for nests — expanding the cavity as the colony develops.
For signs of an underground yellow jacket nest, look for small stones and dirt piling up around the opening of a burrow. They will also use materials on the ground with available openings, such as railroad ties or concrete blocks.

Why Do Yellow Jackets Sting?

As with most stinging insects, yellow jackets will attack if their nest is disturbed or they feel threatened. Unlike bees, they don’t lose their stinger during the act, allowing them to sting numerous times once they decide to attack.

All female yellow jackets can sting. And they tend to be more aggressive than other stinging insects. Yellow jackets can even bite before they sting — grabbing hold of the skin just to get a better grip with their stinger.

Yellow jackets are a danger to humans because they can sting repeatedly and trigger dangerous allergic reactions. Stinging insects send over 500,000 people to the emergency room each year, and yellow jackets can be deadly to people who are allergic.

To prevent a stinging incident, do not wear bright colors or sweet perfumes unless you want a yellow jacket to mistake you for a flower. And don’t swat at yellow jackets because they will release a pheromone that sends other wasps into attack mode.

Why Do Yellow Jackets Swarm?

Yellow jacket swarms can occur when a person unwittingly steps on an underground nest. Ground vibrations like mowing a lawn can also provoke a dangerous swarm attack.

How to Get Rid of Yellow Jackets

Though yellow jackets can be an important predator of pest insects, if you want to get rid of a yellow jacket nest, you can spray their nests with soap and water or pour soapy water into an underground nest to kill the whole colony. You can also get a non-toxic wasp trap or build your own trap out of an inverted soda bottle filled with jam.

Powdered insecticide can also neutralize nests, and aerial nests can be destroyed by placing a cloth bag over the nest at night and submerging it in water.

Scout for nests during the day when you can see workers entering and exiting, but treat nests only at night when yellow jackets are drowsy and don’t see very well.

If a nest is underground, you can seal off the entry and exit points and fill the nest with pyrethrum gas. But when it comes to serious nests, removal should be left to the professionals.

To keep yellow jackets away from your home, leave high-protein foods like meats and pet food indoors. And limit sources of sugar in the fall, when yellow jackets develop a taste for the sweet stuff — especially sugary hummingbird feeders.

If you are dining outside, slice up some cucumbers and scatter them around your barbeque. The acidic properties will drive these buzzy insects away.

Seal your garbage cans, clean up after picnics and hang crumpled paper bags outside your doors and the eaves of your home. Yellow jackets will think they are nests and they’ll seek out different territory.

Seal up any awnings or cracks near your home that could serve as prime nesting grounds. If yellow jackets do invade your home, it is wise to enlist the help of a professional exterminator who has access to specialized equipment and follows stringent safety protocols.

To prevent wasps from returning to an old haunt, change up the environment where the nest once existed. By cutting tree branches and hanging up new decorations, returning wasp scouts will be unable to relocate their former territories.

If yellow jackets are getting in the way of your seasonal fun, get some much-needed help from Stark by filling out the form below.