Solitary and secretive, brown recluse spiders have a violin-shaped marking on their back. The base of the instrument appears at the head of the spider and the neck of the violin appears at the rear.

Brown with one-inch legs, there are 13 other species in the same spider family that may be falsely identified as a brown recluse. 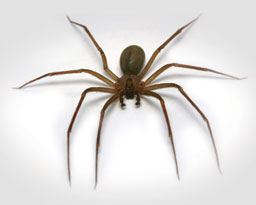 The most common and widespread brown spider, brown recluses are also known as fiddle-back spiders based on their violin-shaped markings. While the violin may be difficult to discern, the best way to identify a brown recluse is to look at its eyes.

Brown recluses have six eyes arranged in pairs instead of the usual eight arranged in rows of four. They also have solid brown abdomens covered in fine hairs that resemble velvet.

The nocturnal brown recluse spends its nights hunting for cockroaches, crickets and other soft-bodied insects, though they can go months without eating. During the day, these venomous spiders rest in their webs, which are usually constructed in a forgotten corner or crevice.

Female brown recluses mate just once in their lives to produce eggs throughout their lifetime. From May to July, females produce several egg sacs containing approximately 50 eggs each. The eggs hatch a month later and it takes about a year to grow to adulthood.

Since one female is all it takes to establish an infestation, it’s important to inspect items before moving them to new locations. Once they are established, brown recluses can be difficult to control. They can even survive six months of extreme drought and starvation.

Where Do Brown Recluse Spiders Live?

Brown recluse spiders are native to the U.S., and can be found from Texas to Florida and up to Ohio. They are often found living outdoors in debris and woodpiles, and hundreds or even thousands can be found in a single area.

When indoors, brown recluses favor cardboard because it mimics rotting tree bark. They can also be found in boxes, clothing, shoes, tires, bedding, furniture and storage areas. And if you spot one of these spiders, there may be many more hiding in your home.

How Dangerous Are Brown Recluse Bites?

A brown recluses’ venom is more potent than a rattlesnake but often less harmful due to the small amount of venom released. Though it is one of the most poisonous spiders in the U.S., there has never been a verified fatality caused by a brown recluse bite. Often, bacterial infections and other medical conditions are inappropriately identified as brown recluse bites.

Brown recluse bites are usually red with faint fang marks. After a few hours, the redness will give way to a ring that resembles a bull’s-eye. In the next 12 to 24 hours, the center of the bite may turn hard and white and blister before turning blue or black as the tissue dies.

In most cases, the bite will heal in a few days or weeks with minimal scarring. In fact, 90 percent of brown recluse bites heal without scarring or reactions, though it depends on the amount of venom injected and an individual’s sensitivity levels. Occasionally, more severe reactions can include redness, blistering, discoloration, tissue death and even scarring.
Bites usually go unnoticed for a few hours. Then symptoms progress from itching to severe pain at the bite site. Victims could also experience nausea, vomiting, fever, muscle pain, swelling and convulsions.
In the most severe cases, a brown recluse spider bite can lead to a form of tissue death known as necrosis. These volcano lesions can leave open wounds the size of a human hand, and take months for the damaged, gangrenous tissue to slough away. In these cases, opioids, anti-inflammatories, antibiotics and skin grafts are necessary, and deep scaring may result.

Immediately after a bite, clean the area with soap and water, apply ice to decrease pain and swelling, take acetaminophen for the pain and elevate the area above the heart to prevent the spread of the venom.

There is no commercially effective antivenin, so if you suspect that you have been bitten by a brown recluse, go to the emergency room immediately and bring the spider for identification purposes.

Brown Recluse spiders are not aggressive and they only bite if they feel threatened. This may occur when a person puts on an item of clothing infested with a spider or rolls onto a spider in their sleep. Their penchant for building webs in boxes and old furniture can also result in contact bites. Most bites occur during the summer when humans encounter these spiders in attics, barns, basements, closets and woodpiles.
When threatened, brown recluses typically play dead or flee to avoid conflict. This spider typically bites when pressed against the skin, such as when it becomes tangled in clothes, towels, bedding and work gloves. Many people are bitten after putting on clothes they had not worn in a while or they had left on the floor.

To avoid brown recluse spiders, keep clothes off the floor, store clothing and shoes inside plastic containers, and shake out items before wearing or washing.

Move your bed away from the wall and remove any skirts and items stored below to prevent a spider from crawling onto the bed. Items worn or used occasionally should be stored in plastic bins and bags, especially if they are found in garages or other dark storage areas.

To remove outside threats, reduce trash and brush piles, woodpiles, boxes, plywood, tires and trash cans, especially if they are next to your home. Seal cracks around doors and holes around electrical wires and plumbing.

Using pesticides to control spiders is often ineffective because they can use their long legs to walk over the chemicals. Sticky spider traps and fumigation have proven to be more effective.

Are suspicious brown spiders haunting your home? Fill out the form below and Stark's dedicated professionals will send your eight-legged invaders packing