Black widow spiders are known for the red hourglass shape on the underside of their abdomens, this striking symbol is meant to ward off potential predators. Black widows were given their sinister name after females were observed devouring males after mating. However, this type of sexual cannibalism is rare and mostly occurs in captivity, when males are unable to get away.

Though there are five species of black widow, the southern and northern (distinguished by a row of red spots instead of an hourglass) species are the most common.

Shiny, plump and black in color, widows are medium-sized spiders about a half-inch long. While females live up to three years, males typically live one to two months. 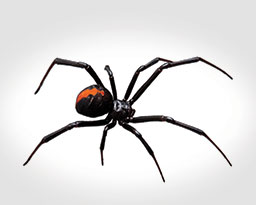 Signs of a Black Widow Infestation

They sometimes spin webs during the daytime and are often found hanging upside down, with their hourglass marking exposed. Besides their telltale tattoo, black widows also have a comb foot — a row of curved bristles on their hind legs used to cover prey in silk webbing.

Nocturnal and shy in nature, black widows only socialize during mating. Female black widows create paper-like egg sacs containing between 200 and 900 eggs each. When the spiders hatch a month later, they often cannibalize each other and very few survive to adulthood.

Where Do Black Widow Spiders Live?

Black widows thrive in temperate climates like the American South. They can be found around woodpiles and often enter homes when firewood is carried into a building. They prefer dark, dry sheltering places and can be found in eaves, boxes, rodent holes, basements, barns, inside unused blankets and shoes, and patio and deck crevices.

While they can cause severe pain, black widow bites are seldom deadly. Young children and the elderly are the most at risk of having a severe reaction to a black widow bite.

Black widow spiders help maintain balance in the ecosystem by eating pest insects like flies and mosquitoes, and insects that harm plants, such as locusts and caterpillars.

Despite their many benefits, black widows can attack humans if they feel threatened. They use their neurotoxic venom as a defense — delivering the most toxic spider bite in the U.S. The venom of a female black widow is 15 times stronger than a rattlesnake's, and they have the ability to paralyze large prey.

Black widows eat flies, mosquitoes, grasshoppers, beetles and caterpillars, ensnaring their prey in silk before sinking their fangs into flesh and injecting enzymes that liquefy their victims and turn them into a fluid food.

What Does a Black Widow Spider Bite Look Like?

If you suspect you’ve been bitten by a black widow, look for two faint puncture wounds at the bite site. If the bite is accompanied by lots of swelling and redness, bite marks may not be visible.
The severity of symptoms varies based on where the bite occurs, the amount of venom ingested and how sensitive the host is to being bitten.

Actual bites may not hurt or may feel like a small pinprick, but within the first hour, a victim could experience full-body muscle pain as the bite swells into a target-shaped lesion.

In very rare cases, black widow poisoning can lead to seizures and even death. While death and long-term complications are extremely rare, and bites usually do not lead to tissue necrosis, seek emergency medical attention if you suspect you have been bitten by a black widow.

Most people recover from black widow bites with the help of antivenin injections. Treatment can also include narcotic pain relievers, muscle relaxants and medications to lower the high blood pressure effects of the spider bite.
If a bite is not properly cleaned, a secondary infection could develop. Before you arrive at the hospital, wash the bite with soap, apply an ice pack in 10-minutes intervals and elevate the location of the bite to keep the venom from spreading.

If you suspect your pet has been bitten, look for bite marks, tight abdominal muscles, whining, howling, trouble breathing, vomiting, diarrhea and a loss of muscle control. If you see any other these symptoms, visit a vet immediately so anti-venom can be administered.

How to Prevent a Black Widow Infestation

To prevent a black widow infestation, keep your yard in top shape by cutting tall grasses and removing piles or firewood and debris, which are ideal habitats for web building and food gathering.

Homes that have insect infestations can be particularly attractive to black widows because they feed on ants, flies and other house-dwelling pests.

To prevent bites, always wear gloves when moving items out of basements, garages or storage areas. Be wary of spider webs and shake out your shoes before putting them on.

Afraid you have a black widow problem? Fill out the form below and one of Stark's dedicated professionals will set your mind at ease.