Cave crickets, also known as camel crickets, camelback crickets, spider crickets, criders, and sprickets, are nocturnal crickets easily identified by their severely curved backs, round bodies, and long spindly legs. Cave crickets are found worldwide and thrive in cool, dark environments. Cave crickets are “accidental invaders”, meaning they typically don’t enter buildings or homes intentionally; however, once they take up residence inside, they can breed rapidly. 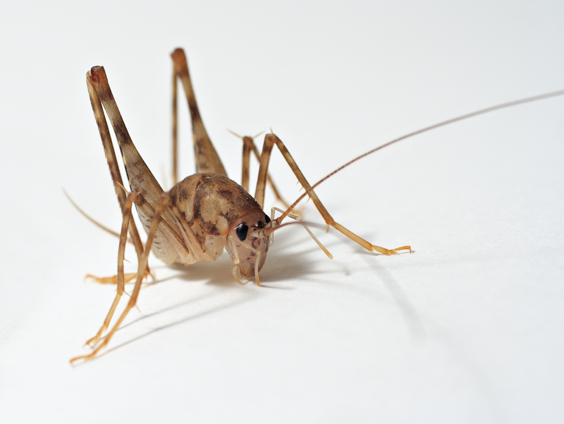 Cave crickets do not pose any health threats to humans or pets. They are not venomous nor are they known to carry any diseases. However, they have been known to damage clothing and other fabrics like curtains when other food sources are scarce.

What Do Cave Crickets eat?

Cave crickets typically consume wood, fungi, other insects, and even other crickets in some instances. When cave crickets find themselves indoors and their normal food sources are running low, they may also feed on fabric such as carpets, towels, and curtains.

Where Do Cave Crickets Live?

Cave crickets typically live outdoors, where they can be found in moist environments like spaces beneath stones, railroad ties, woodpiles, and other debris. Tall grass, dense ivy, caves, and holes in the ground are also common locations to find camel crickets. They can also be found in wells and drainage pipes, or under sheds and air conditioner units.

In especially hot and dry weather, cave crickets may move inside of buildings. Once indoors, they are often found in damp basements, utility rooms, crawl spaces, and garages.

Cave crickets can be found across the U.S. but are especially common in states on the eastern side of the country.

How Do You Get Rid of Cave Crickets?

If you’ve spotted camel crickets inside your home, get help from the professionals at Stark Exterminators using the form below.