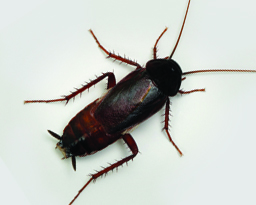 What Do Oriental Cockroaches Eat?

This species of cockroach often travels through sewer pipes, surviving on filth and enjoying temperatures between 68 to 84 degrees. Favoring cooler temperatures, oriental cockroaches will indulge on starchy human scraps, but they mostly enjoy a natural diet of decaying plant and animal matter.

Since they are more likely to enter your home looking for water, these critters tend to be found near toilets, sinks, exposed pipes or plumbing. Though they can survive up to a month without food, they can live only two weeks without water.

Living less than 180 days, female oriental cockroaches produce up to eight egg cases with 16 eggs per case. Female oriental cockroaches carry their egg capsules around for 30 hours before dropping them in a safe, protected area. Sixty days later, the nymphs hatch and reach maturity six to 12 months later. Pale, tan-colored nymphs are active March through summer and may molt seven to 10 times before they reach maturity in the fall.

After developing into adults, oriental cockroaches usually live for six to 12 months, with females producing an average of 200 eggs in a lifetime.

Common throughout the United States, oriental cockroaches can be found in cool, damp areas like basements and crawl spaces. While they primarily live outdoors during hotter months, they may seek refuge in the lower levels of your home during the winter. Often found in sewers, oriental cockroaches also hide out in leaf piles, firewood, mulch, flower beds, and under stoops.

Oriental cockroaches are sometimes called "water bugs" because they come out of drains, and "black beetle cockroaches" because of their smooth, dark bodies. Slower and smaller in size than other cockroach species, males are about an inch long, with wings that cover less than half their abdomen, while females are about 1 1/4 inch long, and have only short wing stubs. Despite these wings, oriental cockroaches are actually unable to fly.

While oriental cockroaches rarely bite people, they can be pushed to do so during large infestations when food is scarce. Their bites are typically small and painless.

One of the more dangerous cockroaches in terms of bacteria and pathogens, the oriental cockroach’s strong drive toward water often leads them to sewers and other sources of bacteria-ridden water. They also love eating garbage and decomposing food.

Oriental cockroaches typically transfer bacteria and viruses from their legs to food, dishes, utensils, and countertops and are known to spread dysentery, e. coli, salmonella, and food poisoning. These pests can contaminate your food and kitchen surfaces, which may make you or your family sick.

Recent medical studies have shown that cockroach allergens cause lots of allergic reactions in inner-city children. They were even shown to cause asthma in children. These allergens build up in deposits of droppings, secretions, cast skins and dead bodies of roaches.

Gaining entry under doors, gaps beneath siding, pipes, open drains, or sewers, you can keep oriental cockroaches away by keeping your house clean and, more importantly, dry.

Good sanitation and habitat reduction, along with vacuuming, surveillance, baiting, and sealing up cracks can quickly reduce or eliminate a cockroach population. Since these trash-loving beasts love the scent of decaying garbage, it’s important to keep your trashcans closed and secure.

Signs of an Oriental Cockroach Infestation

Oriental cockroaches can be identified by the strong odor they give off, which serves as a way for these critters to communicate with other roaches and with their environment.

These nocturnal creatures are rarely seen during the day, so spotting a few during daylight hours could be a signal that there are many more just around the corner. Dark brown or reddish egg capsules may also be detected.

How to Get Rid of Oriental Cockroaches

Oriental cockroaches are harder to get rid of than other roach species. Though adults can be killed with insecticide, new nymphs can hatch within two months.

Insecticide sprays can be used to create perimeters or barriers around baseboards and doors. Bait traps, insecticide granules, and dusters can be effective means of getting rid of roaches.

To properly treat an Oriental Cockroach infestation, get the help of professionals. For a customized treatment plan, contact the Stark team using the form below.