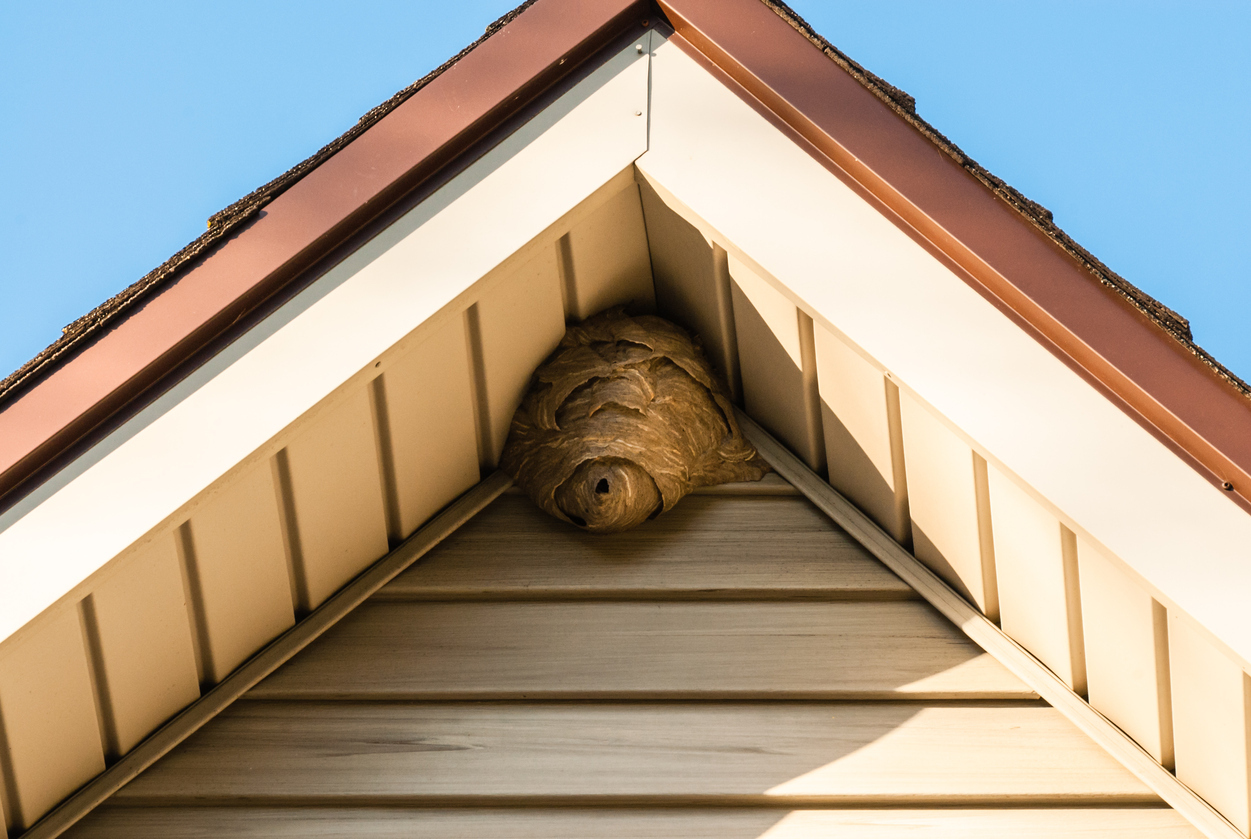 Stinging insects — you’re sure to see them as spring’s warmth thaws winter’s chill and nature begins to bloom. Most people have an understandable sense of apprehension around their presence and their stinger. While it’s common to see the occasional wasp or yellow jacket flying around during spring and summer, it could also be a sign of a larger colony of insects close by.

When these stinging bugs create their nests on or near your home, they can put a damper on your time outdoors, cause damage to your home, and even become a threat to your health. According to Jim Fredericks, Ph.D., chief entomologist for the National Pest Management Association, stinging insects send more than 500,000 people to the emergency room every year.

“Well-established species such as the bald-faced hornet and yellow jacket can be territorial and aggressive, and have been known to attack in large numbers, stinging repeatedly to stun their victims,” Fredericks said.

The first step in protecting yourself and your home from stinging insects is identifying what their nests look like. Identifying the nest first lets you know what kind of pest you’ve got on your hands. If you happen to see a stray wasp or hornet flying around, you’ll know what kind of nest you should look for around your home. 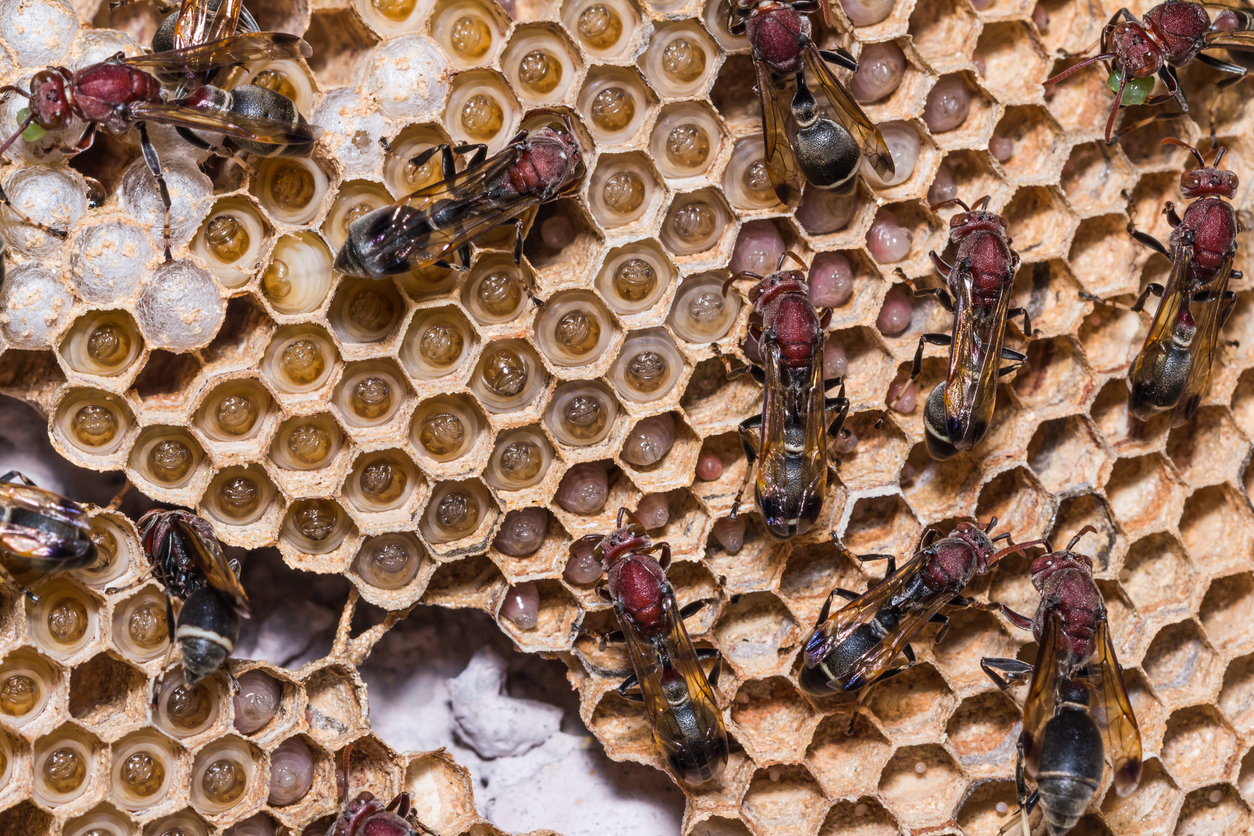 Paper wasps are incredibly common, and there are about 22 species in North America alone. They come in an array of appearances, from black to brown bodies with a range of yellow or orange markings. Red paper wasps are common along the eastern coast of the United States and are often seen in the southeast. While they prefer to build nests closer to nature, they’ve been known to construct nests near humans in places like the undersides of roofs.

Paper wasps get their name from the paper-like pulp they use to build their nest — a material made from saliva and wood fiber they gather. There are hexagonal cells inside a wasp nest, so if you see this, a nest is in its early stages. An established nest will look like a gray or reddish cocoon hanging from a branch or within a shrub. If they’ve used your home as a building site, it might be attached to a doorway, eave, or doorframe. 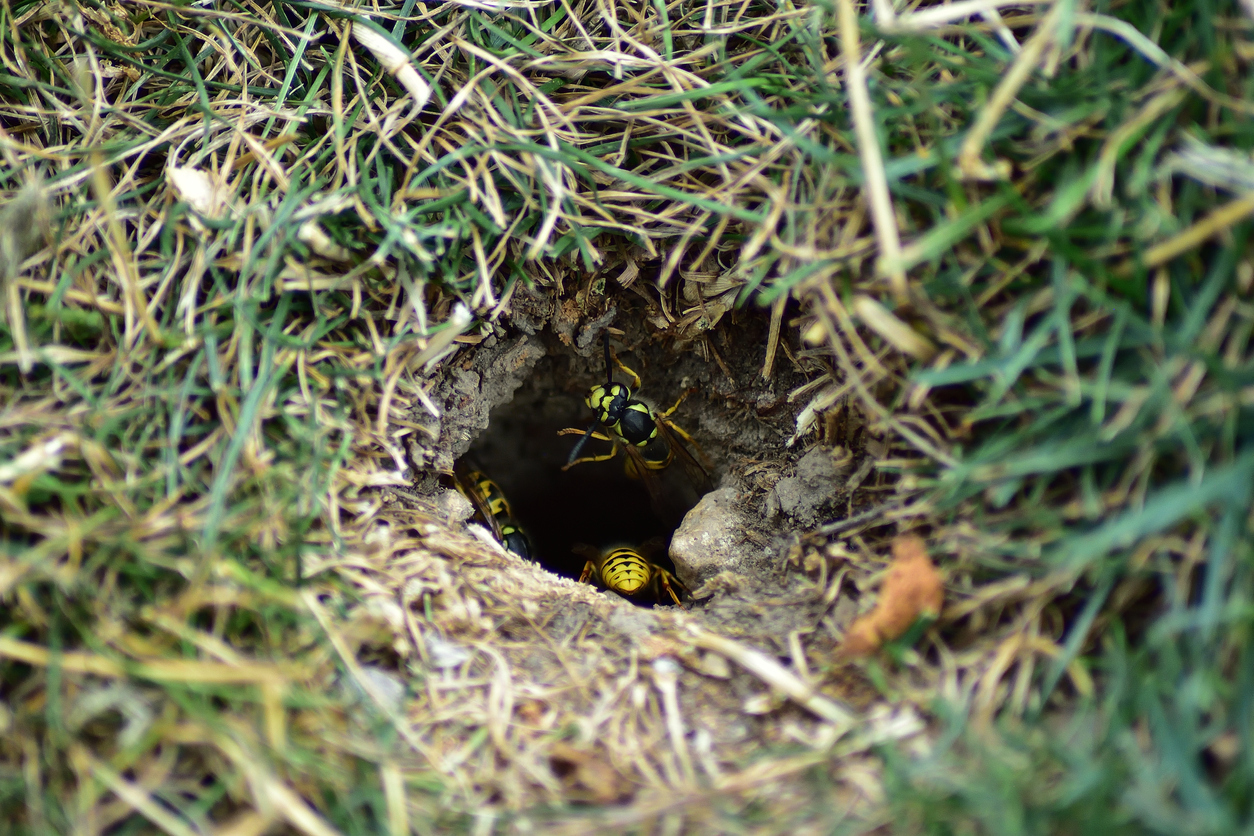 Yellow jackets are often mistaken for wasps, but are shorter and thicker in shape. Yellow jackets can be found any place where humans live, but are more common in hot and arid climates. They often build their nests underground or in hollow logs, tree stumps, attics, between walls, under eaves, or inside recycling bins where sugars are common.

Like paper wasps, yellow jackets construct their nests from wood fiber chewed into a fine, paper-like pulp. Their nests are harder to spot than a paper wasp’s nest because they build them underground with entrances that are typically the size of a nickel. 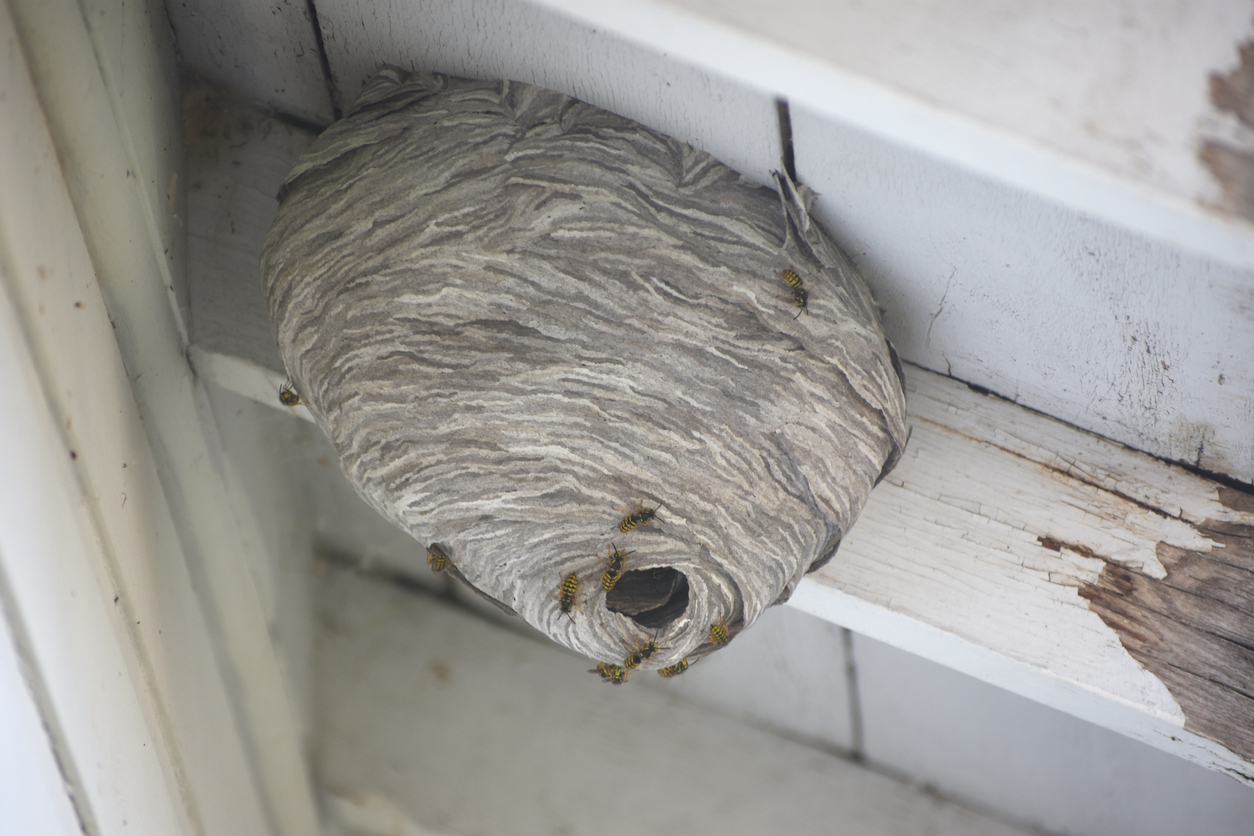 The only true species of hornet in the U.S. is the European hornet, and they can be identified by their thicker, rounded abdomen section. Their coloring can be similar to that of wasps, but they are typically black and white with little bright color details. They prey on other insects and rarely scavenge for sweets and proteins, and therefore they don’t typically nest in close proximity to humans. When nesting, they prefer to be in trees or large bushes at least three feet from the ground.

Similar to wasps and yellow jackets, hornets construct their nests out of a paper-like pulp. They prefer to build in areas with plenty of shade, so you might find a nest hanging from an eave, roof, or overhang. The hexagonal core of a hornet nest is encapsulated in an egg-shaped covering that can be up to two feet long with a single entrance. 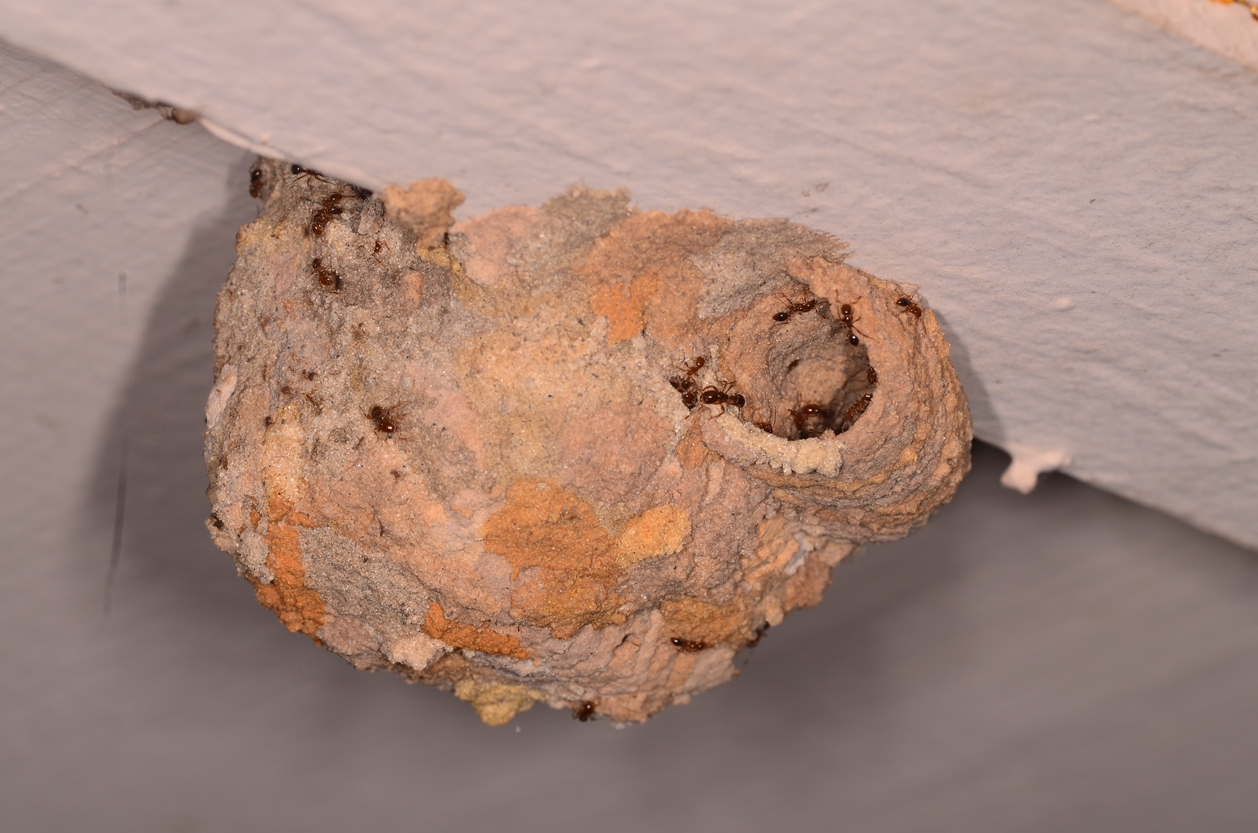 Mud daubers are a type of wasp, but have significant differences to paper wasps. Physically, they are usually black or brown with fewer striped details. They also have string-like torsos that make them visibly different from most wasps. Found all over the U.S., they are not typically dangerous and are the least territorial and aggressive of their species.

Mud daubers like to build their nests in secluded, shaded areas, such as under porches and decks. Although they are wasps, they don’t use wood pulp to make their nests — instead, they use mud or clay to build cells and honeycomb-shaped structures. Organ pipe mud daubers build structures shaped like cylindrical organ pipes. If you spot one of these nests with multiple holes, it could mean that the nest is inactive or old, since mud daubers create holes when they leave the nest.

An active stinging insect nest can be dangerous. Don’t risk a DIY removal — call Stark Exterminators for a professional solution.