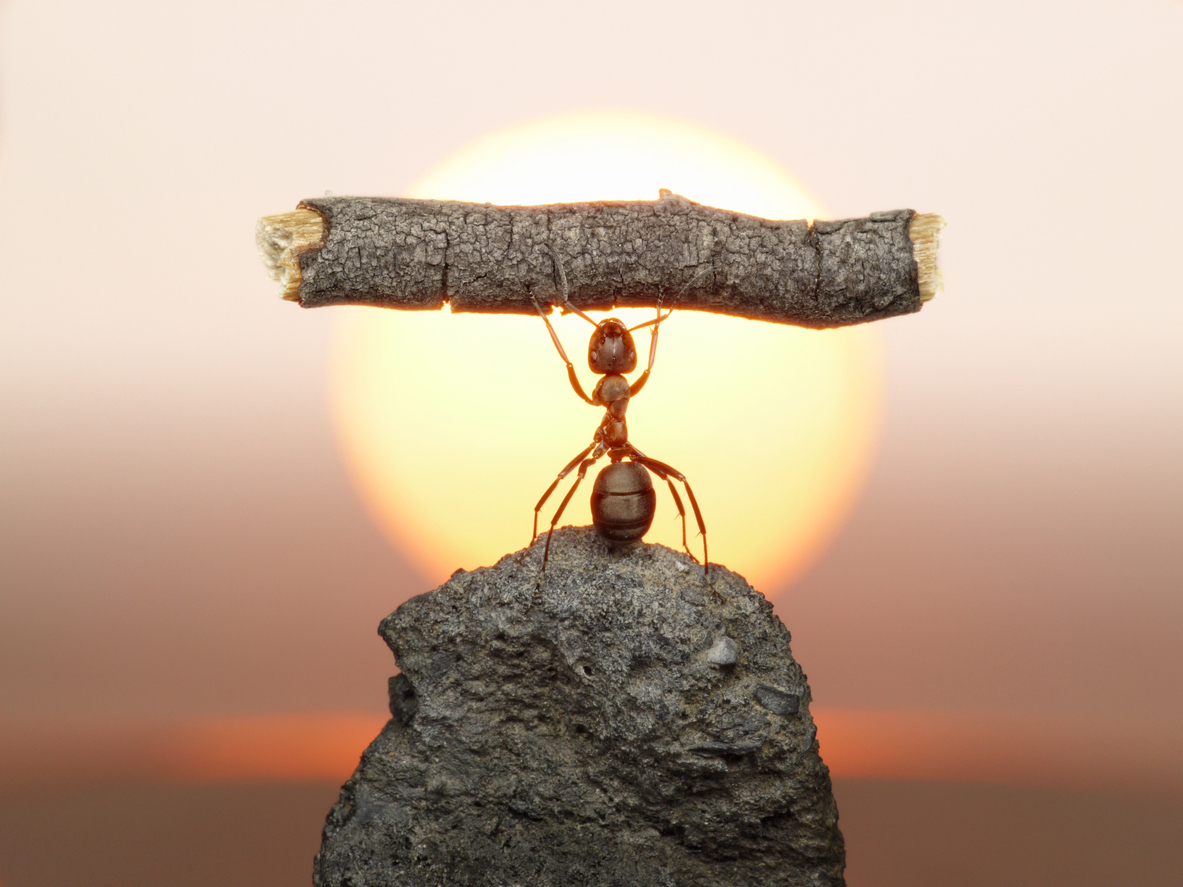 Meet the Hardest-Working Bugs Around

Need a little motivation at the office? How about inspiration at the gym? These hardworking bugs just might inspire you.

They may be small, but bugs are mighty creatures. So many of them perform incredible feats every day, from building entire critter societies to lifting many times their body weight. Check out how these tiny creatures build, lift, battle and defend their titles as the hardest-working bugs on the planet.

Think you work out hard at the gym? Consider Onthophagus taurus, a horned dung beetle that can pull 1,141 times its own weight — the equivalent of a grown man lifting six doubledecker buses. This dung beetle species is the strongest insect in the world, although unlike its dung-y brethren, the Onthophagus taurus doesn’t use its super-strength to roll poop around. While the female beetles prefer to bury fecal matter, the males use their heroic muscle to duke it out with one another.

Commonly called driver ants or safari ants, the Dorylus genus of ants are mostly found in east Africa and are known for their incredible drive — and ferocity. These nomadic ants travel in large swarms along the ground, using their powerful jaws to decimate whatever crosses their paths, from snakes to birds and even humans. But this isn’t what makes them hardworking. It’s the driver ant’s queen that does all the hard work. The Dorylus wilverthi queen lays approximately 3 to 4 million eggs per month, making her one of the world’s most prolific mothers.

Unlike the pesky termites that infest homes, the cathedral termite of northwestern Australia is no freeloader. These hardworking bugs build their own home — a towering structure made of dirt, debris and feces that can reach over 17 feet tall. Cathedral termites move nearly a quarter of a metric ton of dirt to build their mounds, which can withstand rain, gusts, and most importantly, extreme heat. But cathedral termites actually live in the ground beneath their tower, not inside it. Instead, the tower functions as a complex air flow system, balancing carbon dioxide and oxygen and keeping the termites’ underground nest cool and humid.

These little bugs might not build elaborate nests or lift heavy weights, but they sure do work hard at keeping your garden beautiful. Ladybugs eat aphids and other soft-bodied pests such as mites, scales, thrips and white flies. In addition to eating the bugs that like to chow down on your precious plants, ladybugs also eat pollen and nectar. This makes lady bugs not only defenders of the garden, but excellent pollinators as well.

This arachnid gets its name from its two very bulbous eyes, which provide exceptional night vision to these Australian creepy crawlers. The ogre-faced spider belongs to the Deinopis family of net-casting spiders. Instead of building a traditional spider web and waiting lazily inside, the ogre-faced spider spins a tiny net that it holds between two claws. Under the cover of night, the ogre-faced spider awaits its unsuspecting prey — and that’s where its huge eyes come in. Using spectacular night vision, the spider spots a bug and ambushes, throwing its net over its prey like a stealthy fisherman. Each time it catches a meal, the ogre-faced spider must spin a brand-new net and begin the hunt all over again. Talk about hard work.

We get it — bugs are inspiring, but they can also be a nuisance. If pesky insects are overstaying their welcome at your home, call Stark today. We’ll make sure they do their hard work elsewhere.